Meet my best friend Scott Johnson.  Scott and I have known each other since Jr. High and we play music together several nights a week at his house we affectionately call Circle J Studios.  Scott not only drove me to meet my oldest daughters mom 30+ years ago, but he helped me record their lullabies in recent years. Scott has a motto he lives by, Pay It Forward.  Whether it's shipping a guitar across the country to a total strangers child, giving away an amplifier to a young singer or a guitar chord chart to a beginning guitar player, he walks the talk of paying it forward.   So it's no surprise that when a fellow worker of his found out they needed chemotherapy, his first thought was to shave his head to show his support.  This is the simple story of that task and I was privileged enough to lend a hand. 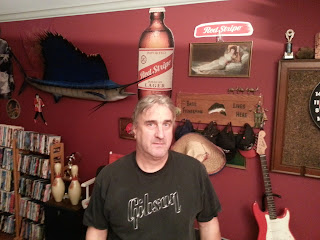 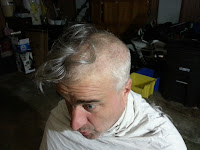 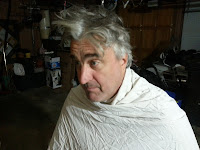 So we start
out in the garage and I use the shears on him.  My last experience with this kind of hair cut was for my basic Army training in 1982 and it took all of 30 seconds for the barber to do the job and cost me $2.75.
This time it took much longer. 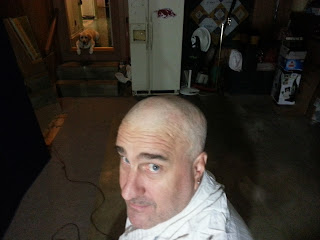 We finished the first step and Samson seemed to approve. 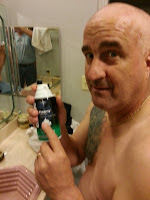 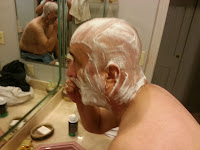 Then we moved inside and Scott lathered his head up and did most of
the shaving himself, I helped with the back side of his head. 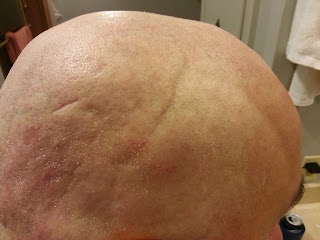 This scar from being kicked by a cow when he was a kid just explains so much! Now we know why he is the way he is! 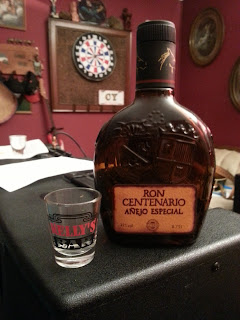 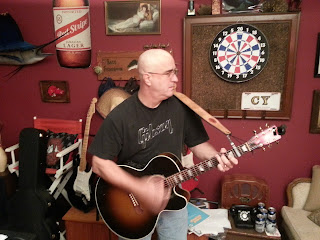 It did not seem to affect his guitar playing. 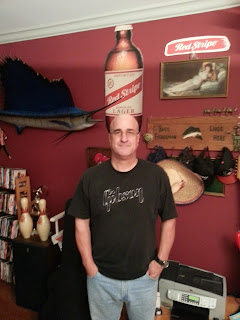 The after shot.
Those who have known me for a while know that I tend to be more lucky than smart.
Having Scott as a best friend is proof of it.